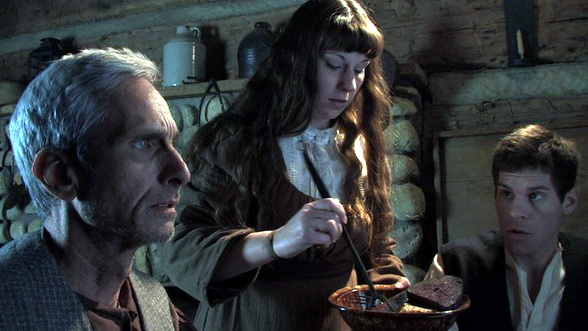 When I think of the old universal monsters, I just smile. They take me back to a time where things were simple. As a kid the universal monsters were my first introduction to horror. Without even seeing a movie as a child I automatically knew who Frankenstein, Dracula, The Mummy, The Wolfman, and The Creature were, I attribute the toy line “Monsters in my pocket” for this. 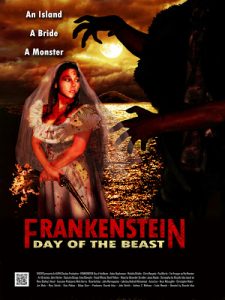 Frankenstein: Day of the Beast was actually very fun. I am by no means saying it was perfect, because it wasn’t, but I enjoyed watching the film. While watching this I kept thinking how much the style, and score reminded me of classic Hammer films and drive-in monster movies. The acting by supporting characters was at time hokey, and most of the digital effects were very obvious, but I felt it really added to the fun of the feature.

Michelle Shields and Adam Stephenson carry this efforts characters like the weight of the world. Miss. Shields plays Elizabeth the soon to be wife of Dr. Victor Frankenstein (Adam Stephenson). While she seems in the dark about why her soon to be husband has taken her to a desolate island to be wed she reluctantly complies. Soon they realize that they are being hunted by a gigantic creature that is picking off the group one by one.

Adam and Michelle were the best part of this feature. I felt they both did an amazing job with the characters emotions and development as the story progressed. My problem is more with the supporting actors performances. I felt most scenes were forced and unnatural. The story was ok, I felt there were some unnecessary scenes used, but that is usually the case with smaller feature length efforts. Generally those scenes are used to extend the running time, however at 1 hour and 30 minuets I feel some of the scenes could have been shortened to add fluidity to the movie.

The film really nailed the setting, while some of the rooms in the church were custom built it really felt like you were in the church from the ceremony. The island is a great setting for the film as well. The heavily wooded areas around the grounds were a great touch. The gore special effects were very well done as well. Some great shots of ripped off skin and entrails really set the pace for kills.

I really enjoyed the film. I think the supporting actors could have done better, but I think it added to that drive-in movie feel. GLP gives this independent effort 3 out of 5 stabs for retro feel, movie monster throwback, and strong lead performances. If you would like to know more about this film check out the official website and Facebook page. View the trailer below.