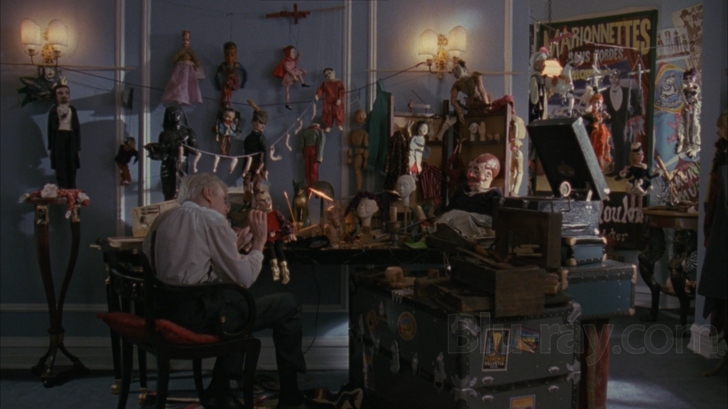 I am a product of the home video era. I was raised in a video store. The earliest memories I have as a child were running up and down the isles of the numerous local video stores my mother managed. See, My mom had been working in the home video industry for quite some time when I came around. I can recall sitting in back rooms of NUMEROUS video stores watching any video I wanted… As long as I didn’t get out of line and start acting them out. One of the first horror movie covers to really intrigue me was Full Moon Video’s Puppet Master. I thought it was great, dolls that come to life to do their masters bidding! I was instantly hooked. Every chance I got I would pop in the series and just watch terrified of the possibilities that my action figures could do the same. But unfortunately we all grow up sometime, some faster than others, some just look grown up. I always held on to this film, even after all my wrestling and cartoon action figures had long been goon and forgotten.

While this movie is definitely not perfect, there is a quality of charm that make up for the continuity issues and goofs. And while this film doesn’t give me the awe struck feeling it used to, it still manages to take me back to a time when things were simpler. Charles Band’s Puppet Master is a creative film with very innovative villains. The dolls are my favorite part of this film. Blade, Leech Lady, Pinhead, Tunneler, and Jester all struck a chord with me. I even at one time had a small jester action figure. All the creative elements in this film make it a stable in the horror genre, & also did enough to spawn 9 total films, the 10th which is due out in October of this year. While critics have almost nothing but hate for these gems, the fans have giving their stamp of approval on this Full Moon Franchise. 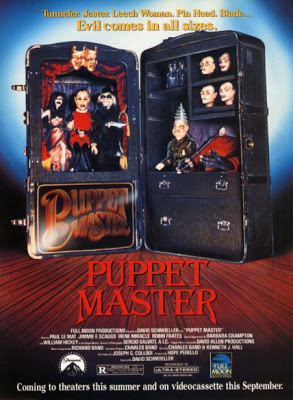 Long story short this film is about a group of psychics brought together again by the death their colleague. Soon things in the Bodega Bay Hotel starting getting strange when friends start disappearing and the group begins to have violent visions of the demise. Aside from the creativity and amazingly crafted puppets, this film is hit or miss. Most of the acting is subpar at best, and there are so many continuity errors if your playing a drinking game to them you would probably be passed out on the floor before the movie ends. Fortunately as I said before this film has this charm about it that really keeps me interested, even when I am utterly disgusted by the events that are unfolding on the silver screen. Maybe is nostalgia, or maybe not.

Even though the actors could have stepped up their game, the gore and special effects are very well done. Full Moon Entertainment thrives off putting out B-Movie’s with gore and t&a. This film delivers both in rather creative style. Without giving away anything, lets just say the endings practical effects really carry the film. Let’s not forget the animatronics! At the time of Puppet Masters release Child’s Play had come out only a year before, and Stuart Gordon’s Dolls (Produced by Full Moon’s Charles Band) the year before that. The animated doll had not been done so well before this point, with the exception of the Made-For-TV classic Trilogy Of Terror in 1975.

I rather enjoy the work of Full Moon Entertainment, even if they are low on production quality and full of campy cheese. I thrive to be entertained and Full Moon delivers the goods. With all that said Puppet Master is no masterpiece. While full of awesome effects and creativity, the acting is lack luster at best. In the case of this film, the dolls carry the work. The dolls make you want to watch the whole movie. I mean, come on… Killer Puppets… That’s pretty sweet in my book. GLP gives this Full Moon effort a 3 out of 5 stabs for creative villains, great special effects, and amazing puppet design.

You can pick up the movie at Amazon by itself  or in a boxed set with move of the Puppet Master movies.